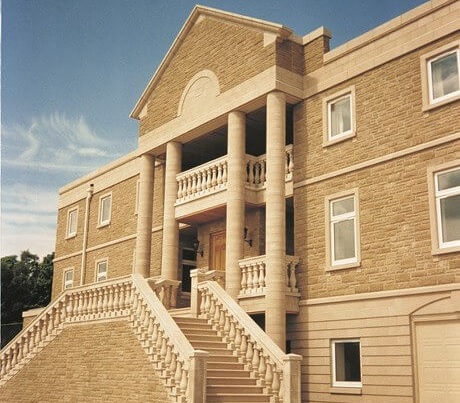 An Introduction to Cast Stone Dressings
When we think of our homes, we all want to be comfortable, to have things that are ours to represent us. In most cases, this could be how we decorate the interior, change the soft furnishings within, or how we landscape the garden. What often gets overlooked is the house itself. How can we improve the aesthetic from the outside looking in?

What are cast stone dressings?

We tend to think about maintenance and upkeep, keeping drains clear, roofs looked after, doors and windows solid and secure. Yet, beyond the purely structural parts of a building, there are decorative features that can be added to improve the look and feel of your home. Architectural cast stone is just one aesthetic element that can sometimes be incorporated into walls, windows, doorways and other key features of the house to enhance its appearance after construction - although, not all cast stone dressing types will be appropriate for this.

So what exactly is cast stone, how is it made, and what is it used for?

What’s the difference between cast stone and concrete?

Cast stone is a form of concrete, in the sense that it’s made from the same ingredients including cement, sand, aggregates such as crushed stone and gravel, as well as pigments for colouring. Aside from its basic parts, that’s really where the similarity with concrete ends.

Cast stone products are made to an exacting standard, essentially recreating the density and solidity of cut stone. With any concrete, even precast concrete made for architectural use, there might be air holes or gaps within it. Because of the refinement of the materials involved, and the smoother consistency than what you’ll find with concrete, the mixture is poured into a mould more easily. It will then be vibrated to shake out any trapped air pockets.

When set, cast stone is textured to a very fine grain, allowing for no inconsistencies. Cast stone manufacturers might also give the product an acid etch treatment, creating an authentic finish to accurately mimic the look and feel of stone.

As real stone can be carved and sculpted to produce similar architectural effects, why choose cast stone?

Firstly, pricing makes all the difference. You get attractive results with cast stone that holds up against natural stone, but for around a third of the cost. It’s also easier to come by as natural stone often must be sourced, upping the price.

There are other benefits to cast stone, which has been specially created to have improved properties such as consistency of texture. Cast stone is tough, with a higher moisture resistance than natural stone. It can even be produced in a certain tone to match existing features, by mixing aggregates with a particular colour. This is something that can be hard to achieve with natural stone, making sourcing the ‘right’ kind of stone an even more expensive and time-consuming process.

As we’ve touched upon, cast stone has toughness and durability that is not only comparable to natural stone, but even exceeds it. Because of the density of cast stone, and its reduced moisture penetration, it is protected from damage due to wear or frost.

As a specialist material, it requires more exacting production techniques and finesse, which can mean that when compared to other concrete products, it can be more expensive. As an example, a cast stone supporting sill might be twice the price of a concrete lintel, but unlike a purely structural item, the cast stone sill is also decorative. It is made with a precise, decorative finish that requires a higher quality of concrete made by an experienced engineer.

These handsome dressings can be found throughout a property, either replacing existing details, or adding decorative elements to enhance the appearance of a home. Because of the specialist nature of how cast stone is used, pieces can be custom made. Although, there are many standard products, from roof to window, and door to gatepost, that we can cover.

How do I clean cast stone?

It is possible to clean cast stone, and while it’s durable against various weather conditions, it’s not always protected from intense pressure washes or chemicals. A regular hose or bucket and brush is fine for cleaning. If there are stubborn stains, sugar soap can be used, but it’s important to not saturate as this can cause staining or discolouration.

If you need to shift mortar or other light deposits, avoid using a wire brush as this can cause surface damage. A stiff bristle brush works very well for this type of cleaning. Chemical cleaning should only be undertaken under advisement of the manufacturer, as this can potentially change the texture, or even the colour, of cast stone.

Cast stone can be used to enhance a home, and as a specialist construction material, usually requires an expert builder to replace existing aesthetic or structural elements. When the work is completed, the results can give a real sense of classic elegance to a building, whether that’s from the addition of cast stone sills or a more elaborate portico.

Travis Perkins brings together everything you need for construction, from decorative, architectural pieces like cast stone to building materials like bricks, blocks, timber and so much more. We’re here for you when you need all the essentials, as well as decorative finishings.